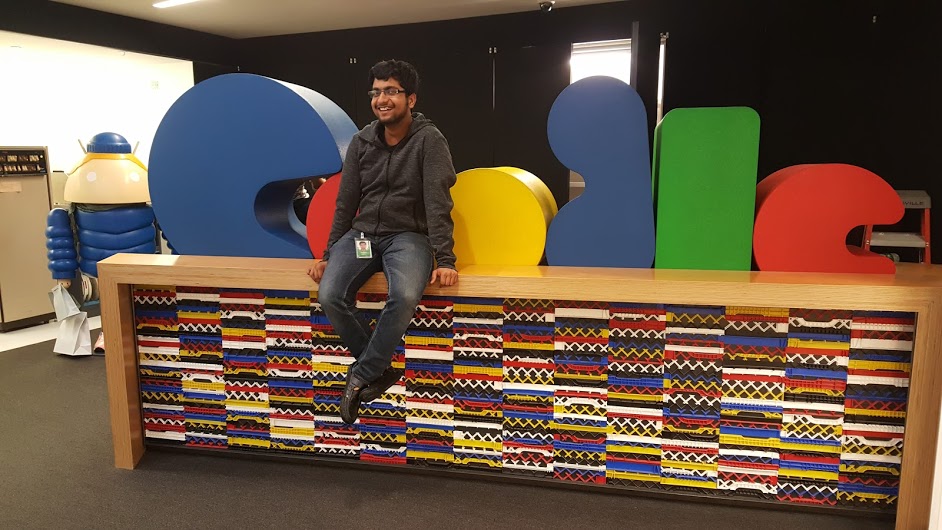 An intern's views - A month's end at Google

Okay, okay.. I know this article is a bit late (and I've backdated it a bit), but I've been really busy. As it turns out, work at Google isn't all that easy (...did I think it would be?). But I'll get to that later 😉.

So let's walk through my first few days in the office. So, on my first day in office, I actually got late. Imagine that...

Anyway, the first week is orientation. I had to go to one of three buildings in which Google resides. It wasn't too hard to find, and when I got there, I realised that reaching late wasn't that bad anyway, since I had to wait in line to be badged as an intern. Also, I wasn't the only one who had had trouble finding their way around the city.

All interns join on a Monday, which means that there is an orientation every week, and my batch was one of the earliest. There weren't a ton of interns joining that week. However, in U.S. interns have orientation in one of the two biggest offices: Mountain View for all west coast offices, and New York for all east coast offices. So we had interns from many other offices as well (Waterloo, for instance).

We had our I-9 documents checked, and proceeded to the orientation room. It was a presentation, where they showed us some of the things that we needed to know. Basic stuff. We got a t-shirt, a bag, our work laptops (to be returned), and those infamous funky caps with a propeller on them. Basically, after my first day, I looked something like this: 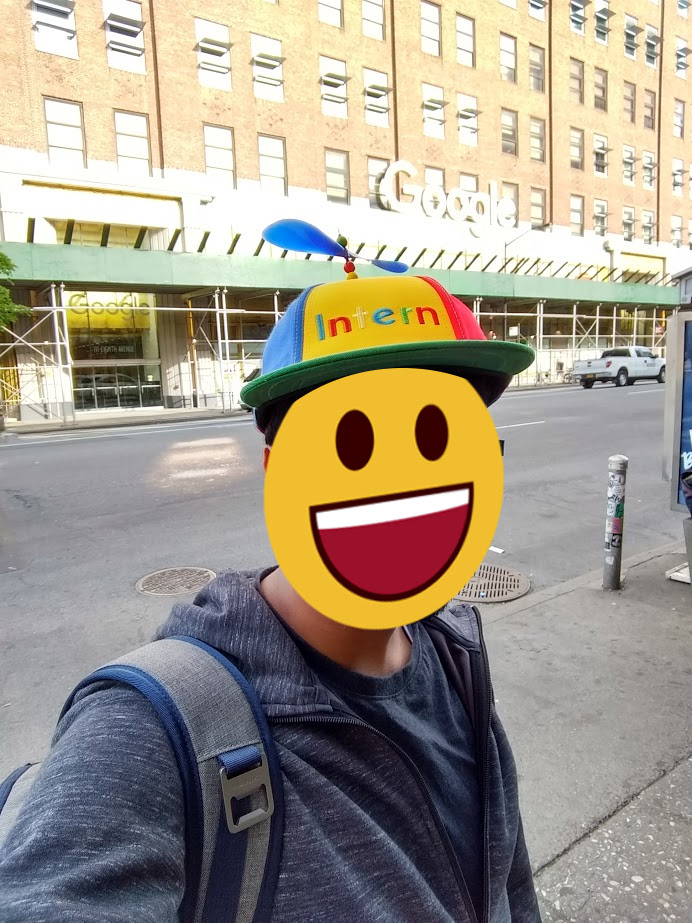 If you're wondering whether we are supposed to ever wear those caps, then yes, we were supposed to wear them during our first TGIF (which ironically are on Thursdays).

After getting to know some of the rules about Google, and making some new friends, we continued on with the rest of the orientation. That is, for the whole first week, we spent our time sitting in lectures about some technologies used by Google, work practices, ethics etc.

The work actually doesn't start in first week, since most interns are actually not in their own office, so the first week is usually all about going home early, exploring the office, meeting other Googlers, and exploring more of Google on its intranet.

I think the thing I love most about Google is how open the culture is. Google has all their code in a single (huge) repository, and even interns had access to all the source code. This includes most of Google's projects, and their systems. This is also very opposed to a company like Apple, where people in one department aren't even allowed to talk to people from other departments about their work. I know some people prefer the secrecy/privacy model, so I'm not praising one over the other, it is just my own preference.

I guess some of you may have seen the movie The Internship (2013), and would be wondering: what about all the things they showed in the movie? Free food? Quidditch matches? Coding on transparent boards? Competing against other interns? Restrictions on dating?? Is that all true?

Hmmm... this is going to take a while.

Free Food - Yes, this one is completely true. Google has two kinds of food outlets; micro kitchens (MKs) and cafes. Micro Kitchens have fillers: fruits, eggs, milk, soft drinks, energy drinks, coffee machines, and even the big barista machine to make your own coffee if you don't trust the automatic machine to do it right. MKs are open 24/7 and usually fully stocked. There's around 2 or 3 MKs on every floor in Google. The rule of thumb is, no matter where your desk is, the food wouldn't be more than 30 second walk away. BUT!!! Cafes is where Google shines even more. Cafes are for proper meals: breakfast, lunch AND dinner. Cafes open on weekdays (not weekends), but the food is amazing (.. did I mention free?). There are a lot of cafes, and each has their own speciality (some excel at desserts, some at breakfasts); and they have different opening/closing times, so usually you can find at least some cafe open during the work hours. Just Google "google food" to get a look at the variety (images aren't even exaggerated).

Quidditch matches - Unfortunately I haven't seen one happen. Google does keep buying tickets to stuff though. I got to go to a Yankees game last weekend, with best seats, and... you guessed it, all you can eat hotdogs and drinks.

Coding on transparent boards - Okay, so this one is tricky. I have a work desktop, where I prefer to code, so I usually don't use the boards. But I've seen people discussing stuff on whiteboards. Managers often have cabins with glass walls, and I've seen them writing on walls, so I'll have to say yes to this one.

Competing against other interns - NO. Google has separate projects for different interns, and they are not supposed to compete against each other. Some projects may have more than a single intern, in which case they'd collaborate.

Restrictions on dating - I'm not even sure why I put this here. Maybe because I was pretty surprised about this in the actual movie. We had to take some ethics classes in the beginning of the intern, and yes, they did mention that dating a person who is your immediate manager is inappropriate (and a request for transfer is recommended, I think), but anything else is fine (yes, this was part of the online mandatory ethics course).

What about other things? Surely there are more?

Hmmm... this is going to take even longer than I originally thought.

Game rooms - We have 2 game rooms in our NYC office. These game rooms have arcade games, table tennis tables, air hockey, video games (smash anyone?), pool, tons of board games, foosball tables. I could go on (I'm not joking), but I think you get the idea. Apart from this, we have a room dedicated to wall climbing too.

Naps - The whole office is filled with places to sleep. From nap pods to beds, we have it all. It is also pretty convenient and practical since a nap during work hours can really help to reset the mind. How convenient you ask? Look for yourself. 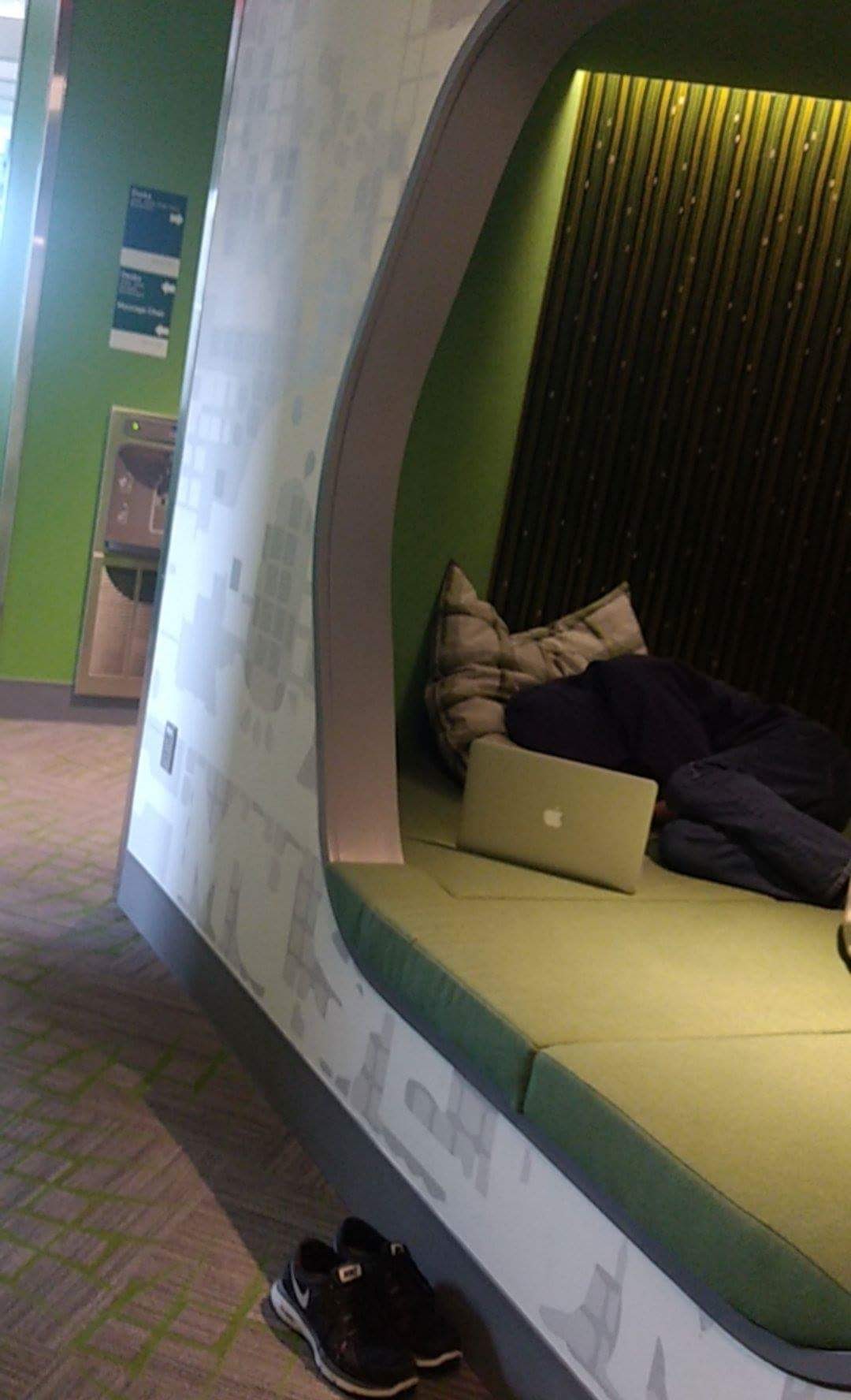 Tech stops - If you've been to nice offices, they always have these stationary racks, filled with all stationary you'd ever need. Like papers, copies, pens, refills, clips, whiteners, etc. This is like that, but it is not stationary. These are electronic accessories you'd ever need in your work. Power converters, dongles, USB cables, chargers, privacy screens, mouse, keyboards, mouse pads... You get the idea.

Massages - Googlers (and interns) get some free professional massages an year, and I haven't been to one yet. I have a booking coming up, and maybe I'll elaborate later (yes, there are multiple massage rooms in the office).

Massage chairs - Poor man's massage? I guess these chairs aren't cheap to buy. But they are spread around the office so you keep running into them from time to time. Unlike the professional massage, these are free to use.

Classes - Google has classes for a variety of things. While many of the classes are based on developing technical skills, or professional skills, there are a number of classes on seemingly random topics. I took a cooking class, where I baked a set of delicious cookies (which I got to take home).

Memegen - Of course, how can one work on a computer without periodically looking at memes, right? Lo and behold! Google even has its own meme website internally. Your best source of fun and fake news about everything Google!

I really think that Google goes well and beyond to get its employees happy. I didn't mention a lot of other things like people's pet projects that line up the walls, the amazing chefs, and I really would elaborate more on the "working" part of the intern later.

But till then, if you're reading this, leave a comment below :)

Next in series: An intern's views - How far have I come?