For the TL;DR people, here is the verdict. Microsoft has tried (For the first time, it seems) very hard to actually make the OS more hospitable for both technical and the non-technical community. Features like PackageManagement and switchable desktops (Linux Workspace equivalent) actually have made Windows 10 a huge improvement over its predecessor.

So, like everyone else, in the past two days, my facebook feed was filled with posts about Windows 10. As a linux user, I tried for quite some time to ignore the posts, but then finally decided to upgrade my preinstalled Windows to 10.

The article is currently (Day: 1 - Impressions), hopefully, will keep updating.

There is no way to use Windows 8 product key directly in Windows 10. For the upgrade, I had to first install Windows 8.1 (No, I didn't have it installed), activate it, and then use another USB disk to upgrade the OS to 10. Unlike linux, Windows installation (and doing it twice) takes hell of a lot of time. Not good.

After the upgrade, you do get a new key, so that next time, going all the way from Windows 8.1 isn't needed (I hope).

First thing that seems to catch every eye is that the start menu is back. For me, that was a huge relief. The full screen, blue menu, to me always seemed disgusting.

The start menu of the search can also use all features from Cortana, Windows personal assistant, which does exactly what Google Now does for Android, and Siri tries (not in India) to do for iOS.

Try searching for something from Apps, Windows Store, your hometown, shops, do calculations, everything works (You need to enable Cortana before the features become active, though). This came as a huge relief as Windows 8's search rarely gave me useful results. Now I can type "go to google" and it will open google.com in my default browser. If the command isn't understood, it'll default to Bing search. I am still searching to change the default search provider to Google though. Go on, try it. Type '45 ^ 456' or 'phone number of Dominos'. 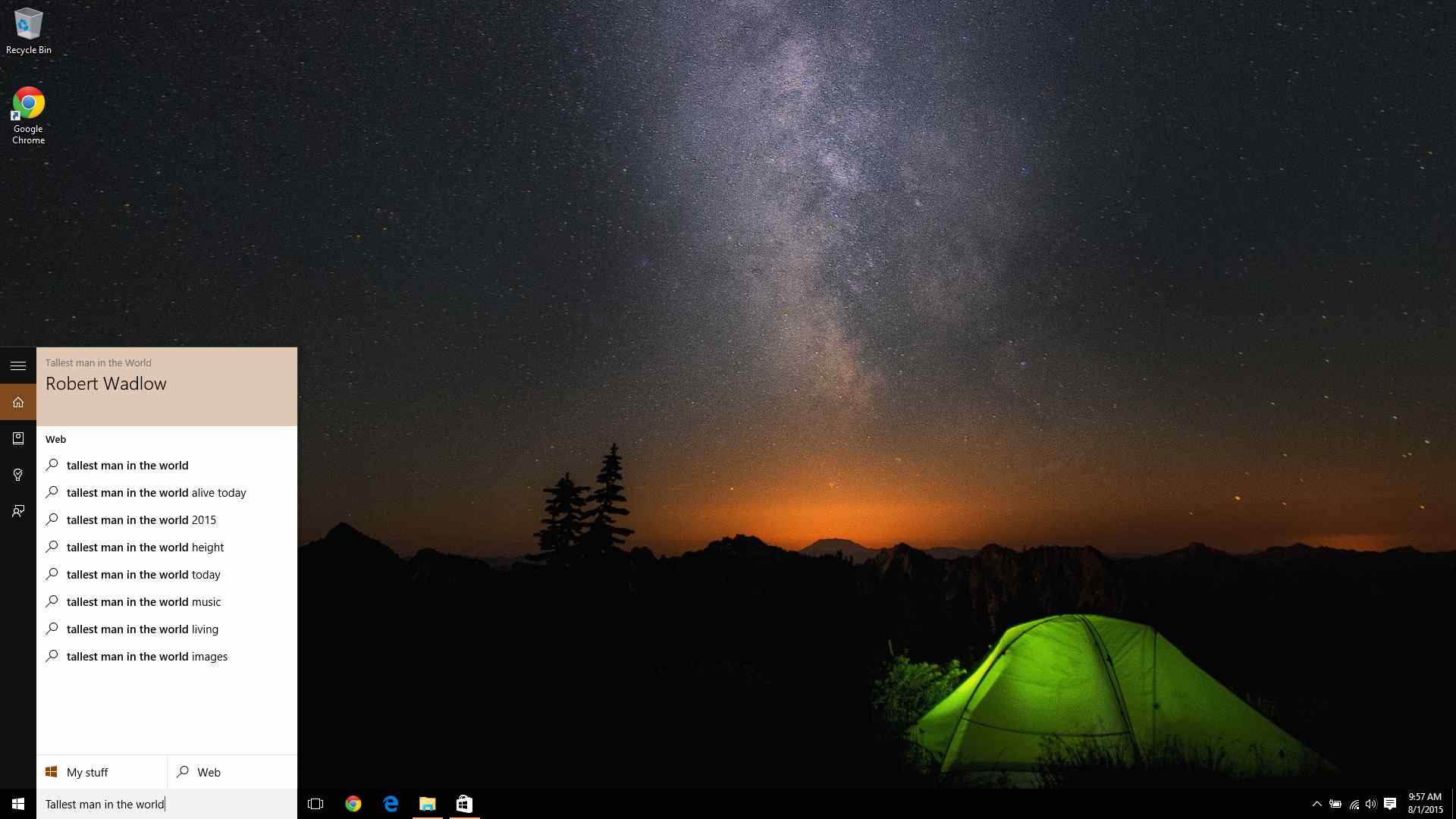 Some of you might know that I'm a fan of tiling window managers. My daily OS is Arch Linux with i3wm, which has the most basic tiling window functionality. Windows, has always had the basic support for splitting screen for two windows, tiled horizontally or vertically. Windows 10, obviously has the same support, but the usage has become a lot more intuitive. If I tile a window to the right half of the screen, Win10 automatically gives me options from remaining windows for the left half. Since using two Windows at once is what I almost always want, this makes using tiled windows pretty easy.

Apart from this, the tiling and splitting can easily be done with keyboard shortcuts. 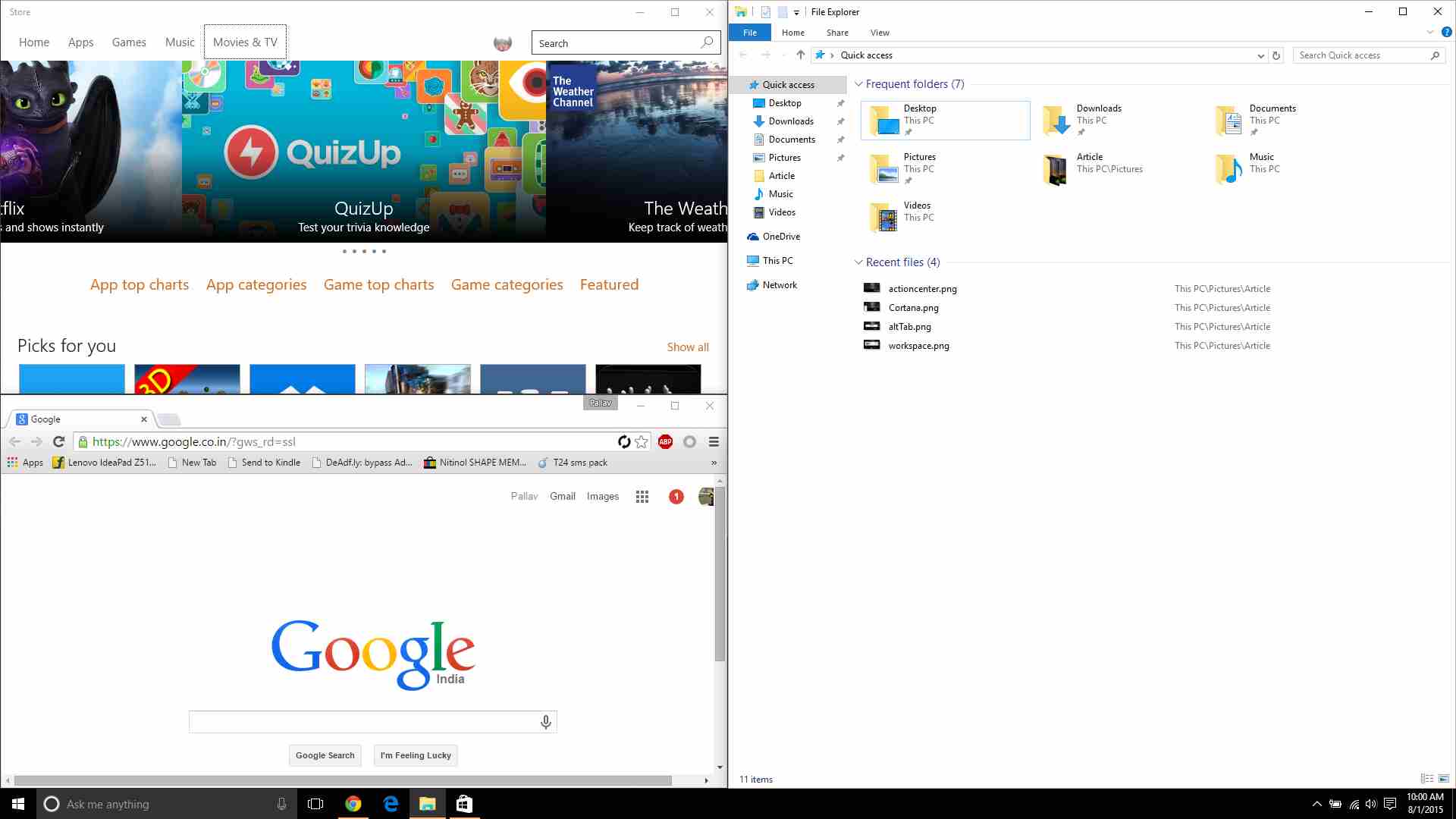 One of the things I hated most about metro apps in Windows 10, was that they seemed to open in a completely different desktop environment. While many people liked that, it always gave me a non native feeling towards the metro apps.

From windows 10 though, even metro apps open in proper windows like legacy applications, with optional full screen mode. This provides a much better integrated work environment. Many apps have been improved too, to make them look less like viewing the app on a huge tablet. 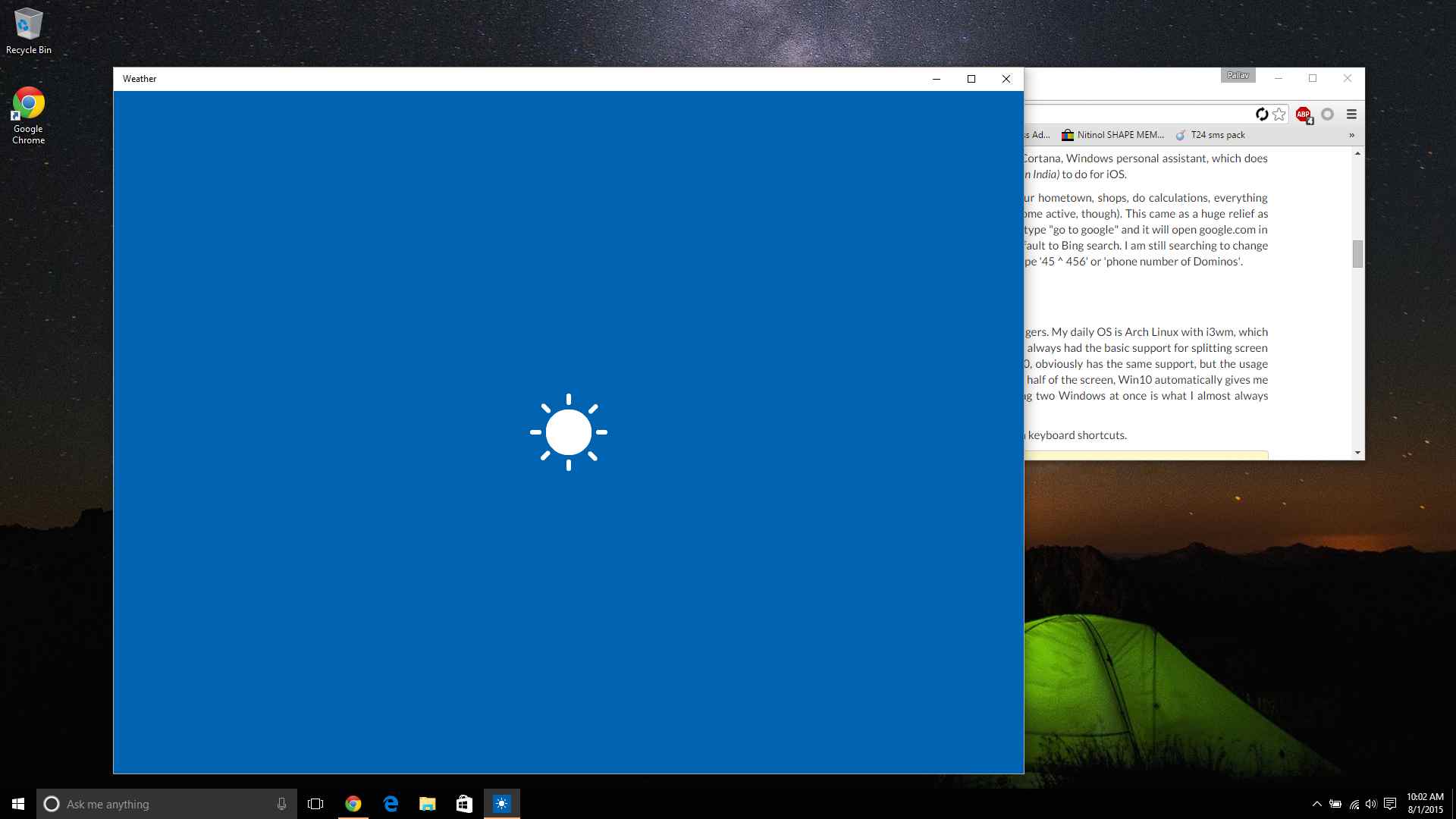 I didn't like it any more than I liked IE 11. Sorry. Won't make any more comments.

Seems like Windows finally borrowed this concept from Unix systems. I won't complain. This is the best thing Windows has done in ages.

You really need to bring using these into your daily routine, or you'd never realise how convinient it is to use multiple workspaces. 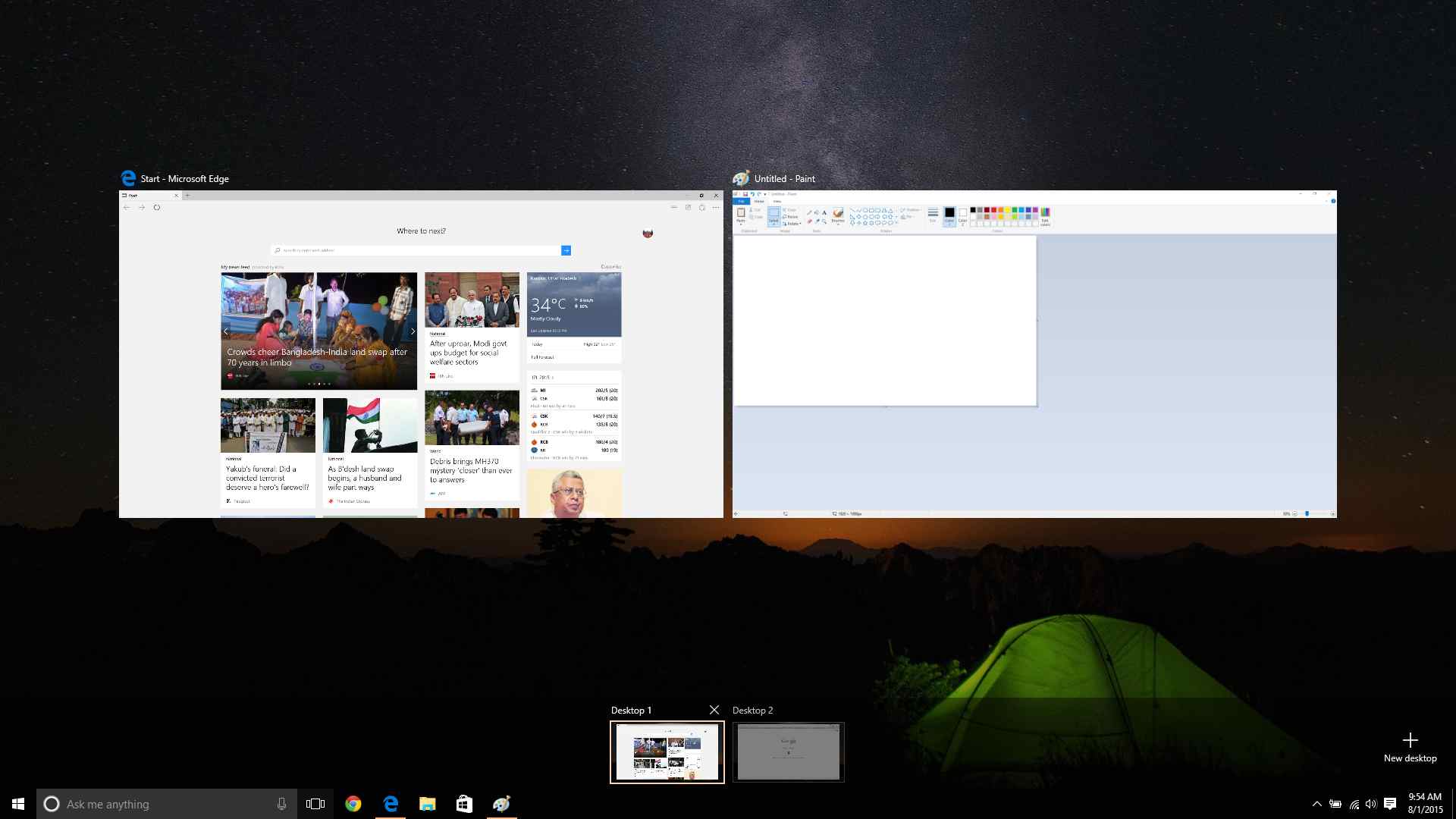 Raise of hands, how many people have used apt-get (Ubuntu), pacman (Arch), yum (Redhat), portage (Gentoo) or brew (MacOS) ? Anybody who has used any unix based distribution would've come across atleast one package manager.

What makes them so popular?

Package Managers usually contain tested packages, which you can trust. They don't install malware or adware toolbars, and make the installation as simple as typing a simple command. In windows, we usually have had to download setups for every software, click Next, Next, Yes, I accept, Next, No-do not install free virus, Next, Next, Install. When you are a regular linux user, this ritual is literally a pain in the ass.

Windows has finally started implementing what was formerly called 'OneGet' and was later renamed 'PackageManagement'. It is not 100% usable at the moment, and has little documentation (I couldn't find any - correct me if I'm wrong), but it's there, and it's there to stay. It's going to be a huge plus if it gains enough support in the coming years.

This had to come up sooner or later. Microsoft is known to focus too much on motions, beautiful transitions and animations. Windows 10 is no different, but the animations are much more snappy and don't seem to come in the way so much.

In windows 8, search in start menu started only after the menu was finally loaded after it's "beautiful" transitions. In win10, I noted, however that transitions are cut short if the user is in a hurry to type and don't compromise user's speed.

The action center also looks great with all the notifications peacefully tucked to one side of the screen.

Basically, Microsoft has tweaked and tucked the most offending parts of Windows 8 into a much better user experience. 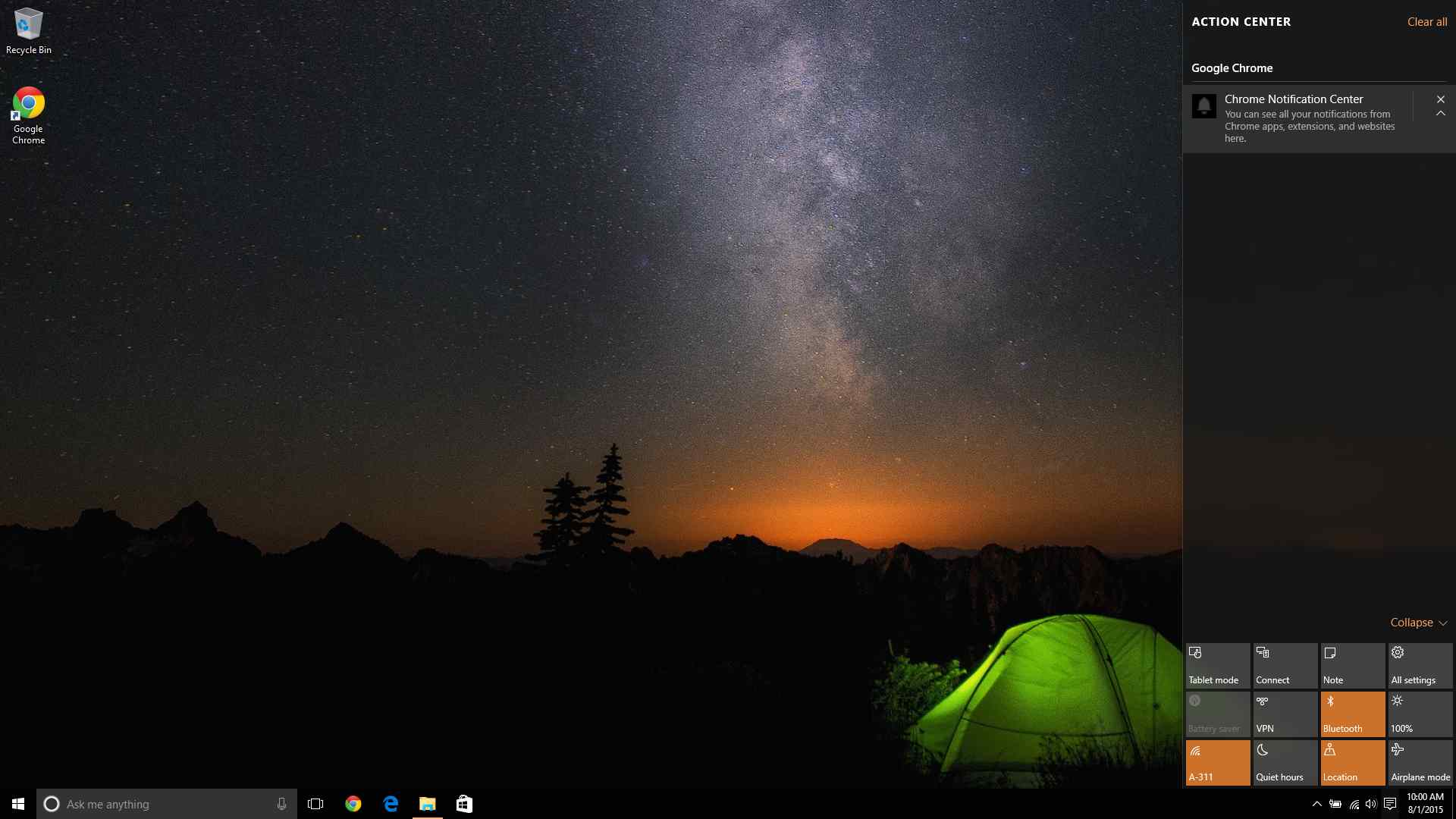 With Windows 10, <Alt> + <Tab> continues with its old function. <WIN> + <Tab> however, has a new job. It opens up a new Task View list, similar to App Spread View in Gnome (Linux). You can leave the keys, and decide between the thumbnails about which window to switch to. 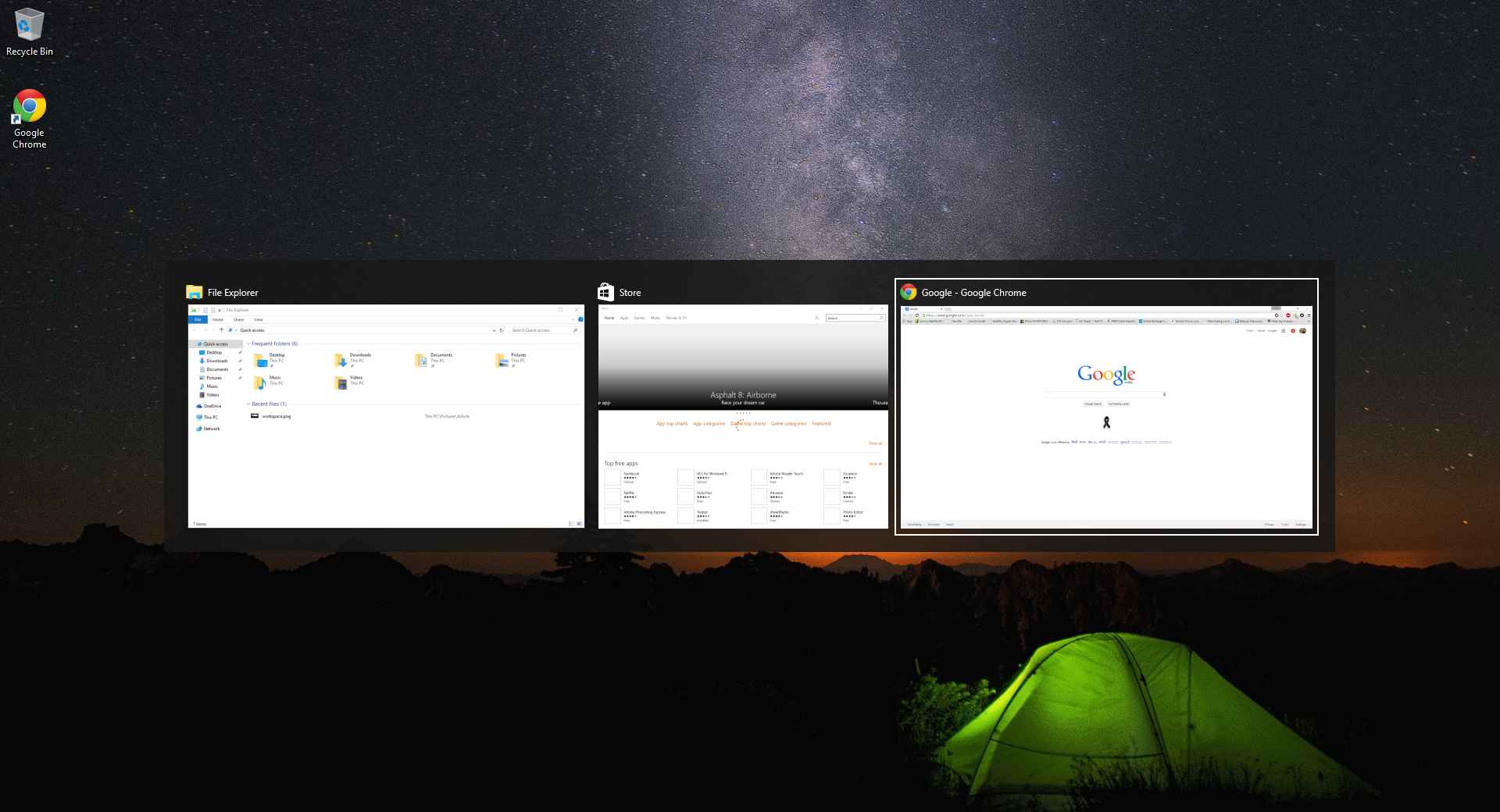 For a person, who was reluctant to upgrade Windows in the first place, I was pleasantly surprised. Windows 10 is definitely a step in the right direction. I really wish that such improvements would keep coming to Windows in the coming years.